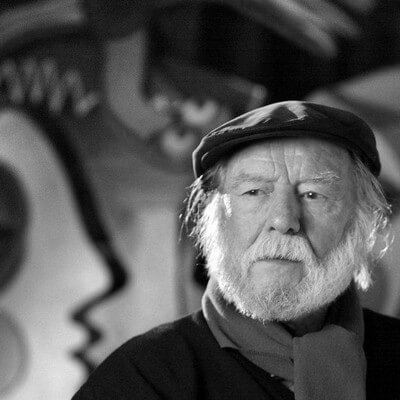 ‘I cannot use misery for my work. War, I was not built on that.’

Corneille was a painter and sculptor; he was born Guillaume Corneille van Beverloo, in Liège, to Dutch parents. He was known as one of the painters of the Cobra group. Although largely self-taught, he took art courses at the Rijksacademie in Amsterdam between 1940 and 1942. There he met Karel Appel.

Painting was not a job or a hobby for Corneille, but a calling. Initially, he worked purely realistically: still lifes, figures and landscapes. Immediately after the war, he held his first exhibition in Groningen. During that period he was strongly influenced by Picasso. In 1948 he broke away from this; his works showed large scaffold-like creatures with terrifying heads. Miro’s influence is clearly visible in exuberant colours and shapes. His lines become looser and lighter. Fantastic animals, birds and fish fill Corneille’s canvases. Together with his friend Appel and others (the brothers Jan and Constant Nieuwenhuis, and the Belgians Christian Dotremont and Joseph Noiret) he founded the Cobra movement.

Two years later he moved from Amsterdam to Paris. Various journeys around the world determined the character of his visual work. Nature, primitive peoples, ancient cultures, classical music and literature are important sources from that moment on. From 1960 his work gradually became more figurative – women, birds and flowers dominated his artistic vocabulary.

Corneille lived a withdrawn life in the French town of Val-d’Oise, where he died in 2010.