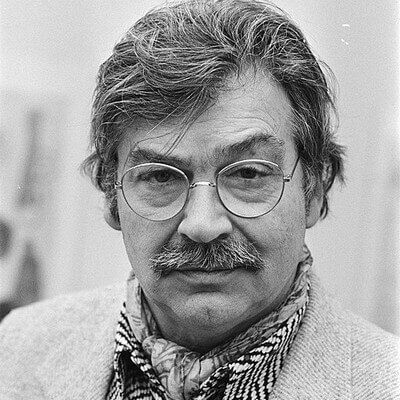 ‘I only mess around a little. These days I put the paint on quite thickly, I throw the paint against it with brushes, putty knives and my bare hands, I sometimes even throw whole paint pots on top of them at the same time.’

Karel Appel was a painter and sculptor who belongs to the expressionist movement. In 1942 (until 1944) he studied painting at the Rijks Akademie in Amsterdam, where he trained in the traditional art of drawing and painting. He met Corneille and Constant during his time there.

Shortly after the war Appel participated in the Jonge Schilders exhibition hosted by the Stedelijk Museum in Amsterdam. In 1947 he started sculpting. A year later he alongside Corneille, Constant and others founded the Experimental Group in Holland. Shortly after, the Cobra-group was established, who in 1949 exposed their work in the Stedelijk Museum which became a scandal. Disappointed Appel relocated to Paris. In 1953 he obtained a solo-exhibition in the Palace of Fine Arts in Brussels.

In the meantime Appel’s work was still not accepted in the Netherlands. He received a contract from the municipality of Amsterdam to make a mural painting for the canteen in the town hall (the current hotel The Grand), but this led to a riot. The civil servants considered the painting Vragende kinderen barbaric and violent.

After the dissolution of the Cobra movement in 1951, Appel’s work became even wilder. His international debut came around 1953, with the Biennale of São Paulo. After that, he gained solo-exhibitions in Paris and New York. He made several mural paintings for public buildings. From 1957 Appel frequently travelled to New York where his work became more abstract.

At the end of the sixties Appel moved to France and gained increased international recognition and appreciation. In 1968 he finally gained a solo-exhibition in the Stedelijk Museum in Amsterdam. Big expositions outside of Europe followed.

Round 1990 Appel had 4 workshops- in New York, Connecticut, Monaco and Tuscany. He passed away in 2006 and was put to rest in Paris, on Père-Lachaise, in a closed circle.