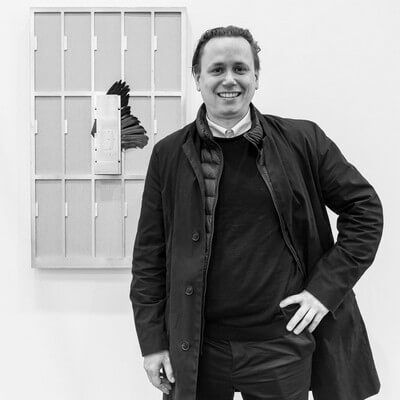 :‘Would visitors who marvel at the latest gadgets realize that they are facing their own future unemployment?’

David Jablonowski makes sculptures, videos and installations. He was educated at the Gerrit Rietveld Academy and then De Ateliers, both in Amsterdam. In his work he examines the relationship between technology, industrial materials and communication.

However, Jablonowski is not only interested in the technology itself, but how it is advertised and traded around the world. This is how he caught a fascination with the use of mountains of spices in promotional campaigns for cameras and printers. On the one hand, the texture praises the detail of the products, on the other hand, a link is made with the age-old trade routes.

In Innovation Screensaver he combines the colorful landscapes of the spices with other objects: a film strip and bright blue sandpaper. He brings these together with slogans from the advertising world, which are prophetic, futuristic and ominous.

David Jablonowski often refers to the rich art history; at the same time his work has a very contemporary look. He realizes exciting contrasts for high-tech elements to be placed in nature. It is not uncommon for him to mislead the viewer by working with materials that appear heavy, but are light, or that appear cold, but are warm. Because of his way of combining and presenting even the latest technical gadgets get the look of relics.

For ART ZUID 2017 David Jablonowski made the installation Public Hybrid; made up of industrial waste, which he coated with carbon and eventually amounted to the appearance of idols.

Jablonowski’s work is aesthetic, although in a sense the materials remain distant and clinical. It fits in these times where we largely get the world via calibrated calculation models and where our liveliness has become artificial to a certain extent.