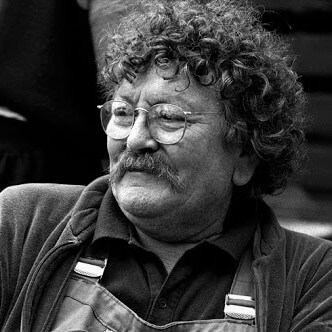 ‘You have to remind people that there are other shapes than boxes, The cave, has a magical meaning for me, that is the starting point for my work.’

Gust Romijn was a sculptor, painter and graphic artist. Trained as an architect, he began painting and sculpting in 1943. In the 1950s he formed the Venstergroep with Piet Roovers and Louis van Roode, a collection of young Rotterdam graphic artists who worked in the studio ‘t Venster.

For the exhibition E55 The National Energy Manifestation in 1955, in which Karel Appel, Constant and Wessel Couzijn also collaborated, he created a mural measuring six by two meters. Showrtly after that exhibition he joined the League of New Sculptures and took part in the 1958 World Exhibition in Brussels.

In the 1960s he lived in New York for some time, where he laid the foundation for his later work which consisted of color-painted steel sculptures. He then became a teacher at the Rotterdam Academy – where he taught Joep van Lieshout, among others – and the Free Academy in The Hague. In the 1970s he was the permanent designer of posters for Poetry International and Film International in his hometown of Rotterdam.

Romijn’s work was shown twice at ART ZUID. During the first edition (2009) his Paperclip (1967) was on display – simple and sleek in shape coloured bright yellow. Eight years later his Two Columns were shown, also sleek, simple coloured bright red. The repetition seems to accentuate the spatiality of the environment. Because his work often remained on the cutting edge of visual art and architecture, Romijn preferred to call himself a “sculptor” rather than a sculptor.

Romijn’s works can be seen at various locations in the Netherlands, such as Mealtime (Amersfoort), the monument commemorating the 1953 Flood Disaster (Ouwerkerk), Het baken (Schiphol) and in Rotterdam, including for various hospitals. Romijn died in 2010 in his hometown Dreischor.