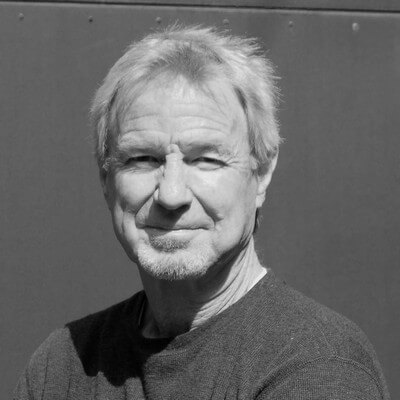 Guy Dill studied at the Chouinard Institute of Art (Los Angeles), where he still lives and works. He is mainly a sculptor of abstract works, but also draws, paints and creates two-dimensional panels. He is one of the most renowned sculptors in the United States. Dill first exhibited in 1971 and many would follow.

In the 1970s he made works in which balance, energy and tension are central. By pushing and pulling against walls, ceilings and floors, images activate and enliven the space. Consequently, viewers become aware of the role architecture plays as a supporter of his sculptures.

His bronze and marble figures are not figurative, but often suggest the lines, curves and agile movements of the human body. Dill’s sculptures vary widely in size and are displayed in interior spaces and the open air. A series of his sculptures are completely white. He has also made sculptures from wood.

Often, the weight of his materials, the tensioning and holding of elements against each other, hanging them up or letting them jump against each other is a continuing theme in his work. This certainly applies to Venice Angel, at the first edition of ARTZUID.

Dill has an illustrious career spanning nearly half a century. He has stories of late nights with Robert Rauschenberg and Jasper Johns, before making his own mark on the international art world. His list of museum purchases and corporate collections is impressive. His work can be seen in the Museum of Modern Art, the Guggenheim and the Stedelijk Museum. He is a board member of the International Sculpture Center in New York.

He has received many awards, including the Harman Eisner Artist in Residence at the Aspen Institute (2010).