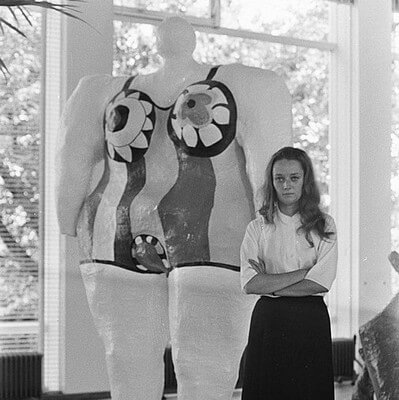 ‘I bear no grudge against men. Actually, I just think they’re kind of pathetic, they’re only good enough to decorate my bed and polish my boots. But I don’t need them for other things.’

Niki de Saint Phalle was a sculptor and painter- self-taught. Her father was a French banker, her mother American. When Niki was three, the family moved to New York. At an early stage she became traumatized by sexual abuse committed by her father. Subsequently she was placed in a monastery by her parents.

After leaving the convent she became a model and married the writer Harry Mathews at the age of nineteen. In 1951 she returned to Paris alone and started painting a year later. In 1955 she teamed up with Jean Tinguely, the Swiss New Realistic artist, whom she married in 1971.

She made her first reliefs in plaster and other materials in 1956. She was influenced by feminism and initially exhibited with aggressive-looking collages, in which she incorporated weapons. This incorporation of weapons was referred to as “masculine”. In the early 1960s, Niki de Saint Phalle made a name for herself as an action painter with shooting scenes.

Her mid-1960s Nana figures were versions of the “primeval woman”; colorful, expressive, man-sized female sculptures made of polyester, which caused a stir in the art world.

In Italy she worked for years on figures from the tarot card game. This led to the sculpture park Giardino dei Tarocchi. She also made animal figures for Noah’s Ark in Israel. Working extensively with plastic and being burdened with the constant inhalation of toxic fumes played tricks on De Saint Phalle. She therefore returned to Switzerland.

De Saint Phalle designed fountains with Tinguely. After his death in 1991, she moved to California because of the clean air. Niki de Saint Phalle died there in 2002.

In 2011, Bête Gentille (l’Unicorn) was shown at ART ZUID. The multicolored unicorn has been imagined as a feminine pet for centuries. It is still a popular figure in girls’ books.