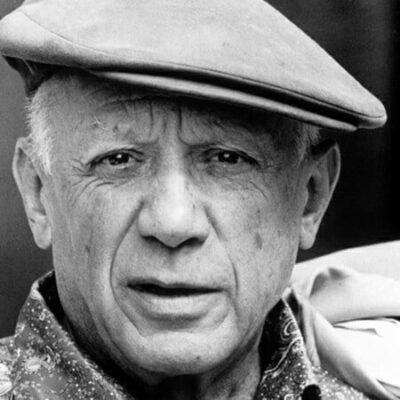 ‘Inspiration exists, but it cannot find us until we work.’

Besides being a sculptor, Pablo Picasso was also a painter, draftsman, graphic artist, ceramist and jewellery designer. His father was an artist, curator and art teacher. At the age of thirteen, he took the entrance exam for an art school in Barcelona and was immediately accepted. He only studied briefly at the Real Academia de Bellas Artes de San Fernando in Madrid, because he believed that training brought him nothing new.

At the age of fifteen, he painted Science and Charity, a large canvas that refers to the death of his sister. After his Madrid outing, he made many portraits. He left for Paris together with Carlos Casagemas. There he befriended Max Jacob, who taught him French and introduced him to literature. Lack of money made him return to Spain.

He also made literary friendships with writers such as André Breton, Guillaume Apollinaire and Alfred Jarry and these had an influence on his life and work.

His most famous painting is Guernica, a depiction of a German bombing of a Spanish city in 1937, during the Spanish Civil War.

In 2013, Picasso’s figure Figure découpée l’Oiseau was moved from the Vondelpark to ARTZUID. Picasso made the sculpture in 1965, at the invitation of Willem Sandberg, director of the Stedelijk Museum. Picasso donated the sculpture to the municipality of Amsterdam on the occasion of the centennial of the Vondelpark. It is a fine example of his cubist period. Although it represents a bird, it is popularly referred to as a “fish statue”.