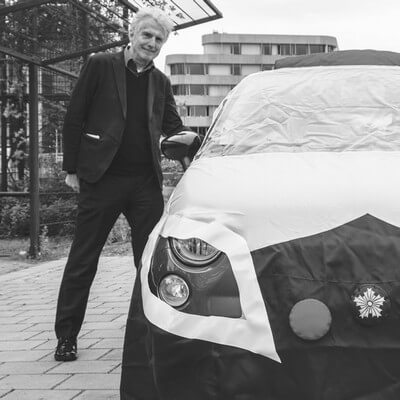 Paul Goede performs with séances. These seances go beyond the existing labels. The most diverse participants experience the ‘Gestalt’ of a work of art without clarity about the cause of it. Visitors speak of a hypnotic experience.

His works cannot be photographed or filmed, which is why he uses a typographic representation. Which he refers to as concept cards. These are the scripts for his seances; postcard-sized. Paul hands out the cards after his performance.

Paul Goede became known for his many seances in Japan, including Kenji Taki Gallery Tokyo from 1998, Star Gallery, Botao Gallery, MAT Nagoya and Art OBU Art all four in Aichi Nagoya. In 2002 he performed at Museum Ludwig in Aachen. In 2004 in the sculpture park of Museum Abteiberg Mönchengladbach.

From 2012, several deceased artists performed Goede’s Mental Color seances. At ART ZUID 2013, the seances were accessible to a wide audience in public space. The seances stimulated sensitivities amongst people admiring the sculptures displayed at the Art Zuid Biennale.

Four years later, for the 2017 edition of ARTZUID, he invited three Japanese artists for a presentation of their works in the Art Chapel, the former Nicholas Chapel in Beatrixpark. Under the title, ‘Vanish in Mental White’, visitors were given the opportunity to attend a séance in the middle of the works twice a week. 26 panels of Yukata Matsuzawa (1922-2006) were shown: his Quantum Art Manifesto is seen as his magnum opus. Eji Watanabe responded with an installation about the park where the chapel has stood for decades, with a floor full of thousands of delicately carved flowers, butterflies and mushrooms. Finally, Okamoto Mitsuhiro was responsible for the design of the Masked Police Car, which welcomed visitors outside – a car wearing pyjamas.