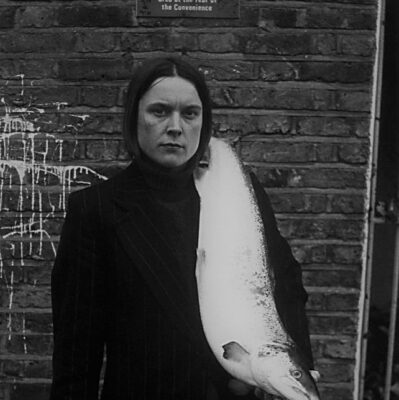 ‘I think art should be amateurish. It must be done out of love. I’ve never seen art as a career and I still don’t.’

Sarah Lucas is a sculptor, multimedia installation builder, makes assemblages with found materials and is a photographer. She grew up in London. Her father was a milkman, her mother worked as a cleaner and gardener. She thought it was enough that Sarah went to school, she didn’t have to do homework. She left school at sixteen and had numerous jobs and pre-qualifications to attend Goldsmiths College of Art. Not much later she would become part of the high-profile Young British Artists group with Marc Quinn, Tracey Emin and Damien Hirst.

Lucas’ work often refers to feminism and sexuality. Her installations and sculptures are often experienced as confrontational, partly due to the raw materials used. She reduces people to a bare frame with clear sexual characteristics, which leads to absurd situations. Humor plays a major role in her work. One of her better-known works, Au Naturel, consists of a blotchy old mattress lying seemingly carelessly discarded in a corner. The bucket of fruit – oranges, melons and a zucchini – suggest a woman and a man.

In 1992 Saatchi included work by Lucas in their collection. She has participated in major group and solo exhibitions in Cologne, New York and Los Angeles. In the Netherlands her work could be seen in Rotterdam, Haarlem and Eindhoven, among others. Her work was part of the Venice Biennale in 2003 and 2015.

Two works by Sarah Lucas were on the Minervalaan during ARTZUID 2021: Sandwich, an enormous, concrete double sandwich that she made in the period 2011-2020, and Kevin, a bronze zucchini of more than four meters from 2013. References to the working class, respectively, and to male genitals.