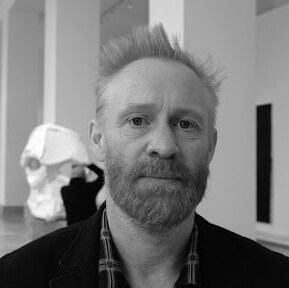 ‘If you really look at the social space, architectural folly has taken over. It’s sculptural, but it’s not a sculpture. (…) Sculpture claims a meaningless, symbolic space. It’s useless. Sculpting as I think of it disappears. The sculpture dies, if not, it is already dead.’

Thomas Houseago is a British born sculptor who has lived and worked in Los Angeles since 2003. In London he attended the Central Saint Martins College of Art and Design and then De Ateliers in Amsterdam. There he came into contact with figurative artists such as Marlene Dumas, Luc Tuymans and Thomas Schlütte.

His sculptures bear traces of the creative process. This could be a piece of iron sticking out of the construction or strong fingerprints in clay. Natural, often human forms are the basis for his sculptures: figures, heads, masks in relief or as images.

Not only Houseago’s daily quest is visible in his work, but also the tension between fragility and robustness. His figures are far from perfect, often partly human, partly animal. Anonymous and animated, terrifying and familiar.

Thomas Houseago strives to create art made for human experience. A physical counterweight to a culture in which the image we have of the human body is determined by a stylized image from magazines, films and television. His sculptures are a plea for the survival of the ancient medium of sculpture.

Houseago had his first solo exhibition in 2009. Two years later his Untitled (Red Man) 4/4 was shown at ART ZUID, an almost four meter high bronze sculpture: unfinished, uncertain and vulnerable. In 2015 there were two other images on display: Large Owl (For B) and Bottle II.