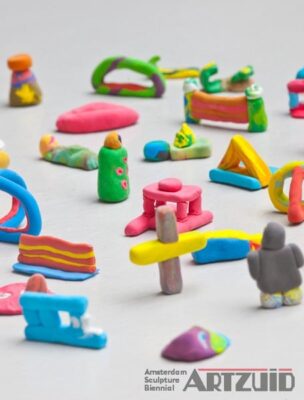 Wataru Nakamura is a sculptor and painter. In Japan he studied Earth Sciences, a science that investigates the interaction between the atmosphere, soil and oceans. He then left for San Francisco, where he studied drawing and painting at the California College of Arts. After this training he returned to Japan.

In 2011 Nakamura was represented at ART ZUID with his Model series; a series of colorful, small clay figures that he made between 2006 and 2011.

In 2016 he worked with a number of other international artists on an exhibition with the publication Art Obulist, which started from the suggestion to introduce contemporary art and culture in Obu, a city without art galleries. This is how a Brain museum was created, a museum that is not limited to a building, but one that makes you think and where new possibilities can only be discovered in that one place. A year later the exhibition returned to Obu.