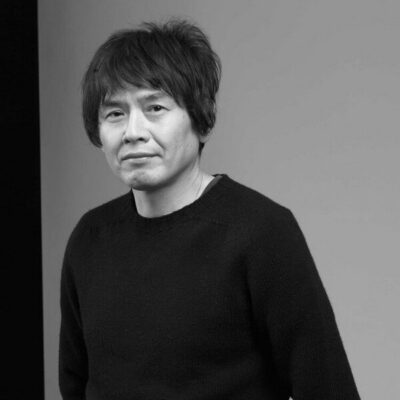 ‘I see children being confronted with bad people, who have lost their childish innocence.’

Yoshimoto Nara is a sculptor, draftsman and painter. He lived in Germany from 1988 to 2000, where he studied at the art academy in Düsseldorf, under the mentorship of A.R. Penck. During that time he grew into one of the most prominent and beloved figures in Japanese pop art.

Nara creates figurative paintings of figures, animals and cyborgs (fusion of man and machine), in a style influenced by the Japanese comics culture, specifically that of the manga comic. The motifs are displayed in two-dimensional and stylized form, in a style called Super Flat Art. An example of such a motif is the “toddler girl”, with wide eyes she looks cute at first glance. But the sweetly colored image takes on a different meaning when it turns out that the girl is carrying a saw or knife. Loveliness gives way to aggression.

Yoshimoto Nara often exhibits his paintings in spaces designed by himself, often in houses. He derives the titles of his works from rock and punk music such as Fuck everything or Slash me with a knife. Nara, who draws a lot of inspiration from contemporary music, compares herself to Kurt Cobain, who also gives a voice to a generation that cannot or does not want to express itself.

Nara’s work was shown twice at ART ZUID: in 2006 with the large polyester sculpture Puff Marshie and in 2019 with the much larger Your Dog, made of painted aluminum. In Puff Marshie we recognize the innocent girl, cute and vulnerable on the one hand, but horror-like on the other. Your Dog sinks a bit with its front legs into the ground, which makes it more cuddly. Here, too, a bitter contrast is evident, which has its roots in Japanese culture.