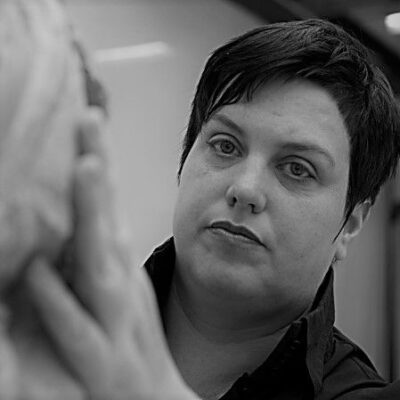 ‘Francis Bacon was not a sculptor, but his work is anatomically very well put together. The pieces about which there is no information, I could usually deduce meaning from the measure and direction that Bacon gave.’

Anne Wenzel is a sculptor and installation artist. She was born in the German state of Lower Saxony, not far from the Dutch border. Wenzel studied at the AKI (Academy for Art and Industry) in Enschede and spent two years during this education at an interdisciplinary art school in Barcelona.

Wenzel mainly works with ceramics. Her installations often consist of large, monumental sculptures that reveal themes such as heroism, heroism, and decay. She experiments with different types of glazes, colors, and other processing techniques. As a result, the sculptures appear partly glossy and partly very rough, or just melt together.

In 2019 she was asked by the then director of the Stedelijk Museum Schiedam, Deidre Carasso, to enter the boxing ring together. Wenzel always liked to watch boxing matches but had never practiced the sport herself. If she won, she would have a floor in the museum at her disposal. She went into training and won the competition.

A year later, she was commissioned by Museum Boijmans Van Beuningen to create the installation ‘Requiem of Heroism’. She built this out of ceramics and filled the entire space. In addition to this museum, leading museums in Den Bosch, Enschede, Ghent, Düsseldorf and Istanbul also purchased works by her. Various organizations and governments also commissioned Anne Wenzel, including the court in Zwolle and the municipalities of Barendrecht and Almelo.

A number of busts, titled Damaged Goods, from 2013 were on display during ARTZUID 2021. She was inspired by the photo book Krieg dem Kriege (War to the war) from 1924. The author, Ernst Friedrich, responded to the German revanchism from the first World War. The busts of apparently senior soldiers were mutilated and smeared by Wenzel, losing all grandeur. At the same time, she denounces both militarism and masculinity.