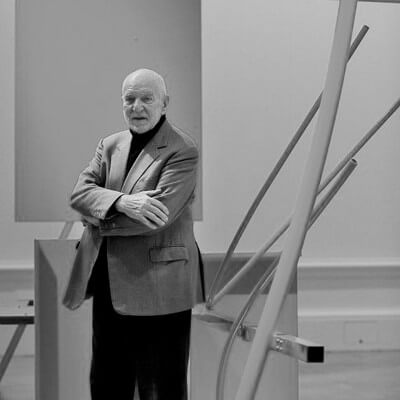 ‘Pessimism or self-pity is often reflected in bad art. Maybe the 1960s were unrealistic. Of course, astronauts went to the moon, but everything wasn’t that great.’

Anthony Caro was a sculptor. He studied mechanical engineering at Cambridge and then art at the Royal Academy Schools. Caro’s style is derived from the modernist school; his teacher Henri Moore had a great influence on him. Picasso, Bacon and De Kooning also played a role in his development. He is seen as one of the founders of minimal art, for which he later also presented an alternative.

In the early 1960s, a travel grant took him to New York, where he met Kenneth Noland and David Smith. In the meantime, he made sculptures by welding or screwing together steel I-beams, plates and meshes. The sculptures are placed directly on the floor and remove a barrier between the work and the viewer. They are invited to approach the work from all sides.

The character and weight of the steel are, as it were, hidden behind a skin of brightly coloured lacquer. The parts of his objects appear to be randomly and non-coherently put together. The images shocked the audience, but gradually attention to the openness and vitality of the constructions and to the rather revolutionary use of materials at the time.

In the 1980s, Caro’s work changed with the introduction of a series of figures from Classical Greece. After a thorough study, he made a series of large-scale narrative works, including ‘After Olympia’, an immense panorama inspired by the temple of Zeus.

As a tutor, Caro inspired a generation of young artists, including William G. Tucker and Richard Deacon. But also a reaction group, including Richard Long, Jan Dibbets and Gilbert & George. Anthony Caro died in 2013.