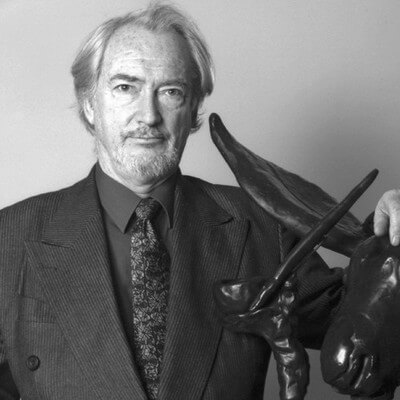 ‘I felt a need to jump into all possible forms of expression, which unfortunately the Education Framework does not allow. My direction has been; any direction.’

Barry Flanagan was a sculptor; he became known for his large bronze sculptures of jackrabbits. After his education at the Birmingham College of Art and Crafts, he took evening classes with the sculptor Anthony Caro. He attended Central Saint Martins College of Art and Design, where he also taught from 1967 to 1971.

During that time (1969) he took part in groundbreaking exhibitions such as ‘When Attitudes Become Form’ (Kunsthalle Bern) and ‘Op loose screws’ (Stedelijk Museum Amsterdam).

The problems surrounding concepts such as plane-space and pictorial-sculptural kept Flanagan occupied for a long time,  he expressed his thoughts in drawings, large and small sculptures. An example of this is a sculpture he made for the exhibition ‘Art in Europe after ’68’ (1980) in the Museum of Contemporary Art in Ghent. Two autonomous shapes emerge from the flat surface, each exuding their own character: a spiral that seems to grow out of hard steel, opposite a stricter and brusque shape. The calculations of the executive engineer coincided with the intuition of the artist in the realisation of the work.

Flanagan represented the United Kingdom at Documenta 5 and 7 in Kassel and in 1982 at the Venice Biennale. Major retrospective exhibitions took place in 1993 (Madrid) and 1994 (Nantes).

Flanagan’s bronze jackrabbits appeared in many places in public space, such as Park Avenue in New York (1995) and Grant Park in Chicago (1996). In 1999 and 2000 he had one-man exhibitions in Brussels and Liverpool. An important exhibition was in 2002 in the Kunsthalle Recklinghausen; it was later shown at the Musée d’Art Moderne et d’Art Contemporain in Nice.

Barry Flanagan passed away in 2009; ten years later his Large ‘Nijinski on Anvil Point’ was shown at ARTZUID.