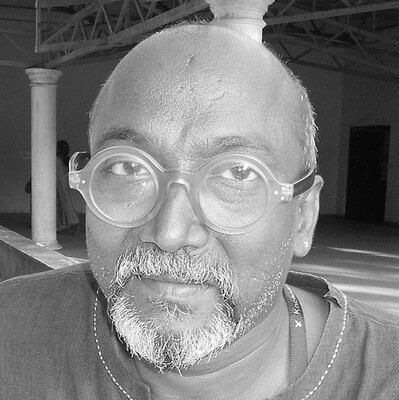 ‘Everything, although transient, is linked to memory. Public memory may be short, especially in today’s fast-paced world. Yet human memory – unlike computer memory – is precious. Everything is ultimately an invention of one’s memory.’

Bose Krishnamachari is a sculptor, painter, photographer, video artist and installation artist. He is also active as a cultural entrepreneur. After an art degree in Mumbai, he continued his studies at Goldsmiths College London.

His work is figurative as well as abstract; often experimental and gradually more conceptual in nature. In the mid-1990s he started to take portraits of internationally recognized artists to prove that painting as a traditional medium was not dead. At the same time, he began to involve himself in museum discourse and began curating shows on a large, international scale.

Krishnamachari is considered to be the mentor of a generation of young Mumbai artists known as the Bombay Boys. His studio attracts artists, designers, architects and filmmakers and in that sense has been compared to Andy Warhol’s factory. He was one of the founders of the Kochi Biennale Foundation and is director of the Kochi-Muziris Biennale, which exhibits innovative and contemporary art bi-annually.

Bose Krishnamachari’s work has been shown at – often self-organized – solo and group exhibitions in India and far beyond. He has received various awards, grants and titels.

‘His White Ghost and the Red Carpet’, a large mixed media work, was shown at ART ZUID in 2011. The setup shows a long table with no fewer than thirteen chairs behind it and many more microphones. It evokes the association of a press conference, but also that of the last supper of Jesus and the twelve apostles.