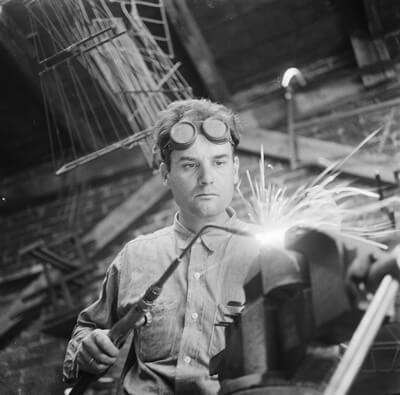 ‘Before me there were no sculptors or stonemasons in the family. The predisposition to plastic appeared very gradually. Always drew in a lot. When I was 17 I drew a lot of deer, horses, birds and insects. Then (18 years) started making figurines in wood and in iron.’

Carel Visser was a sculptor, draftsman, and graphic artist. He studied architecture at the Technische Hogeschool in Delft and subsequently sculpture at the Royal Academy of Art in The Hague. Initially he made stylized iron bird sculptures. Gradually his style became more abstract. He resided for longer or shorter periods in Italy, the United States and Mexico. Visser taught for several years at the Royal Academy in The Hague and later in Haarlem and Amsterdam.

Around 1960 he was involved with cubes. He made a solid closed and a ‘floppy’ cube of wire. Visser was inspired by nature, which partly explains his use of natural materials such as wood, wool, sand, feathers, bones, rope, and leather.

Visser is regarded as one of the Netherlands’ most important constructivist sculptors. In his later work he assembles various industrial materials such as car tires, oil drums, car windows and combines it with natural materials such as eggs, sheepskin, and feathers. Because of the repetitions and variations in his work, Visser’s work has been compared to music compositions.

In 1968 Carel Visser was invited to Documenta 4 in Kassel and the Venice Biennale. That same year, a documentary about his work was made. All this meant greater brand awareness.

In the Netherlands, a number of his works are displayed in the open air around museums such as CODA (Apeldoorn), Kröller-Müller (Otterlo), Boijmans Van Beuningen (Rotterdam), Stedelijk (Amsterdam and ‘s-Hertogenbosch) and Rijksmuseum Twente (Enschede). Tate Modern in London also has a Fisherman sculpture outside.

The first edition of ART ZUID in 2009 showed Visser’s De Gezusters, a large bronze sculpture owned by the Dutch Central Bank. Carel Visser passed away in 2015.