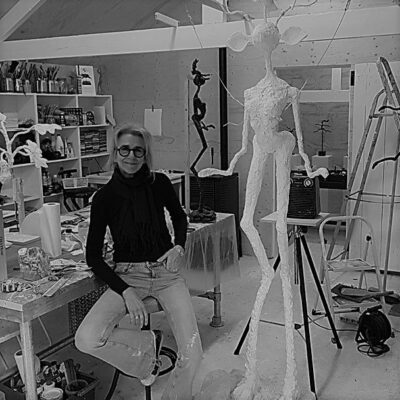 Carin Scholten is a sculptor; she attended courses at the National Academy of Arts and Design in New York and Chelsea School of Art and worked in shared sculpture and painting studios in New York and London.

Her work focuses on the search for serenity, equilibrium and the fragile balance between man and nature. She goes to great lengths to create a domain where everything is in harmony. From a plastic point of view, a difference of a few millimeters in the finish of the sculpture can lead to a disturbance of its entire balance. What seems obvious and simple to do is often more complicated in practice. Imagining a fragile balance requires optimal attention, concentration, and dedication.

Scholten’s mythical figures find themselves in a parallel universe with ‘unearthly’ natural laws and rules. At the same time, the fantasy figures reflect a dreamed reality in which serenity, beauty, optimism and the connection between man and nature are the most important values.

During ARTZUID 2021, two sculptures by Carin Scholten were set up on Minervalaan. Entitled Paradise Regained I and Paradise Regained II, visitors saw two large bronze statues of humanoid figures with antlers, both holding a young hippo. The sculptures had a gold-coloured layer and referred directly to the well-known poem Paradise Lost by the seventeenth-century poet John Milton.