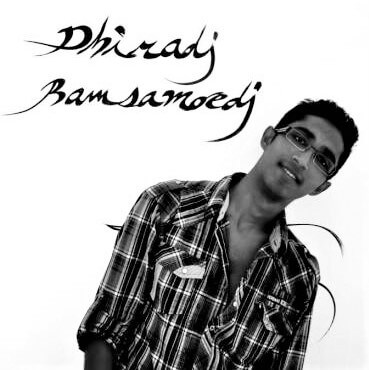 Dhiradj Ramsamoedj is a sculptor, painter and installation artist. In 2004 he graduated from the Nola Hatterman Art Academy in Paramaribo and then attended the Workshop of the Gerrit Rietveld Academy in Amsterdam (2007-2008) and the Institute for Educational Training in Paramaribo.

His works are mostly inspired by ordinary people and everyday problems. Ramsamoedj uses a wide variety of materials and media. Textile is a common thread in this, partly because he grew up in a tailor family, which forms an important part of his identity. But he also uses wooden sticks, plastic bottles and tin cups in his work.

In 2010 he created the wall installation Adjie Gilas, a tribute to his grandmother (adjie). It was part of the group exhibition Paramaribo SPAN. Dozens of aluminum cups formed the main part; the cups were identical to those used by his grandmother and her guests to make coffee.

A year later, Ramsamoedj’s Mighty Man was shown at ART ZUID (2011). The almost life-size cloth sculpture, depicts a human figure, or rather a mysterious being. For the artist, the ideal person has no eyes, mouth or ears. After all, evil can enter through the senses and we can spread it further. His Flexible Man, is similar in material to Mighty Man, also made up of thousands of different pieces of textile, which originated from Africa. The prints, batiks and pangi fabric refer to the different cultures that come together in Suriname.

In 2018 he made a wall sculpture entitled Togetherness for the French embassy. It symbolizes the cultural bond between Suriname and French Guiana, two developing neighbors.