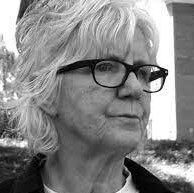 Dini Thomsen is a sculptor, painter and installation artist. Thomson attended the Painting and Drawing Academy Ars Aemulae Naturae in Leiden and followed an apprenticeship with a teacher from the Royal Academy in The Hague. Later, a job as a drawing teacher brought her to Bochum, Germany.

She is the driving force behind the ArToll-Labor art laboratory in Bedburg-Hau, not far from Bochum. Since 1994, a large number of sculptors have been working there temporarily , or for a longer period of time, in a commune-like setting on ‘social sculpture’. The ‘art laboratory’ is a former psychiatric institution from the early 20th century and is comprised of ninety buildings, now arranged in a park-like manner.

In 1988 Thomsen had her first solo exhibition in Bochum. A year later she moved into her studio located in the former cocoa and chocolate factory of Bensdorp in Kleve. Since then she has held exhibitions in Germany, the Netherlands, Spain, Scandinavia, Switzerland, Austria, China and Korea. Dini Thomson frequently collaborates with other, mostly female, artists in Croatia, the Netherlands and Germany.

Since 2017, Dini Thomsen has been working together in Seewerk, which is a forum for contemporary art. The concept is a mix of established and  new art, combined with music, performances and children’s programs.

With her work Behausungen, Dini Thomsen became known to a wider audience. The black, narrow and high houses on stilts do not allow any unwelcome guest to enter. But the work is also not inviting to someone who is looking for a home or hospitable accommodation. Habitation, security or isolation was the title that Dini Thomsen gave to the Behausungen that was exhibited during ART ZUID in 2019. They were inviting but repellent at the same time. For the maker herself, the houses are about a search for protection, against disasters in nature and social injustice.