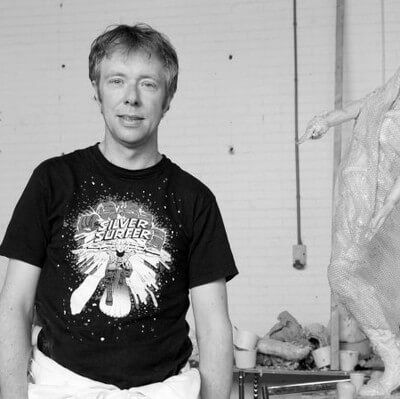 ‘I thought about how a person could go so far in his fantasies that reality and fiction overlap.’

Folkert de Jonge is a sculptor and draftsman. He studied at the Gerrit Rietveld Academy and the National Academy for Visual Arts, both in Amsterdam. He became fascinated by “people who go nuts”. That would lead to a dark, absurd and morbid universe with zombies, mutants, maniacs, skulls and skeletons, with which he seduces and confronts his audience.

De Jong’s sculptures refer to history and sculptural tradition as well as to themes from pop culture such as horror, comics and fantasy. He does not work with classic materials (bronze or marble), but with everyday materials: styrofoam and polyurethane foam, which strongly determine his use of color: baby blue and dirty yellow.

Initially he made “environments”; arrangements of images that form their own world and in which you as a visitor can wander. For example, in 2000 he made a project for the Vleeshal in Middelburg, entitled The Ilemauzer – derived from a character from a seventeenth-century story about witch hunting.

From The Iceman Cometh, which was shown a year later at the Stedelijk Museum Bureau Amsterdam, he focused more on the classical sculptural approach. And made make bronze statues. The viewer is no longer part of the work, but the spectator.

La Danse, shown at ART ZUID in 2013, is reminiscent of Picasso’s sad harlequin, but also resembles a medieval skeleton whose task is to exorcise and drive away the plague through a dance. It is representative of his disturbing, somewhat sinister and sometimes even gruesome themes.

Since 1998 his work has been shown in numerous solo and group exhibitions at home and abroad. In 2002 he received the Charlotte Köhler stipend and in 2003 he won the Prix de Rome.