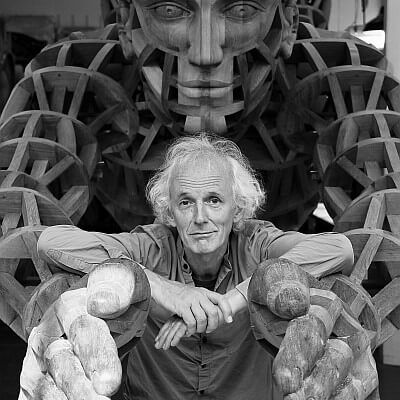 ‘I view my work as a horribly slow declaration of love.’

Gerhard Lentink is a sculptor and environmental artist. He attended the Vrije Academie in Amsterdam and then studied monumental design and painting at the Academy of Visual Arts Sint-Joost in Breda. Lentink makes large wooden sculptures, often with classical or poetic themes.

He first makes design drawings and then constructs them with great precision. His knowledge of (art) history and culture is useful to him – he interweaves this knowledge with his monumental sculptures.

A number of his sculptures are included in the collections of, among others, the Beelden aan Zee museum (The Hague) and De Federatie (Zwolle). In France, Spain and Scandinavia he made large landscape projects with a number of colleagues – photographer Reinout van den Bergh, sculptor Gertjan Evenhuis and his brother-in-law Ivar Diekerhof.

Lentink’s Opus 28: Christophorus was shown during ART ZUID 2013. The almost seven meter high statue of a male figure – from feet to chest height – refers to the giant Christopher who, according to popular legend, lived on a river and carried travelers on his shoulders to the other side. He not only carried the whole world on his shoulders, but also all sins. Catholics saw him as the patron saint of travelers.

On the occasion of the celebration of ‘Dordrecht 800 years city’ in 2021, Lentink presented a proposal for an immense image of the point where the Merwede and the Wantij converge in the city where he has lived for decades. In the Middle Ages, an enormous statue of the city maid Hanneken van Dordt stood not far from this place. This new statue, Choëphore, is an open construction of steel and wood.