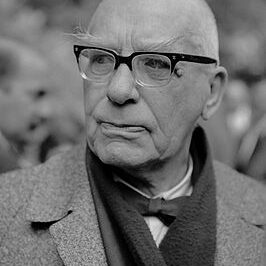 ‘I’m not done with the glazed sculptures yet, because this typical Amsterdam street scene offers an inexhaustible series of examples. Although it is not easy to make drawings unnoticed. I do plan to exhibit these sculptures, but I just don’t know where and when.’

Hildo Krop was a sculptor and decorative artist. He became best known as the city sculptor of Amsterdam. As the son of a baker, he was trained as a pastry chef. His mother’s family was artistic; his grandfather was a photographer and art teacher and two of his uncles painted and photographed. In 1906 his talent as a draftsman was discovered; when he was employed as a chef for a family in England.

Upon return to the Netherlands, Krop decided to become an artist and left for Paris to study at the Académie Julian. Shortly afterwards he learned stone carving from John Rädecker at the Rijksacademie van Beeldende Kunsten in Amsterdam. He briefly gave drawing lessons in Haarlem. Via Berlin and Rome, he returned to Paris, where he became friends with Ossip Zadkine, who taught him to carve straight from stone. At the end of 1912 he returned to the Netherlands and became proficient in woodcarving.

From 1913 to 1916, Krop worked in Hendrik van den Eijnde’s studio, who was responsible for the sculpture commissioned by the Scheepvaarthuis, which was under construction at the time. Krop was appointed city sculptor and was responsible for decorative sculptures on some 400 buildings, squares and bridges in the capital. The statue of Berlage on Victorieplein and the plaque on the monument on the Afsluitdijk are well-known. He also designed numerous war memorials.

In addition to sculptures, Hildo Krop has also designed furniture, ceramics, book bindings, glass and ironwork. Much of his ceramic work was baked at the Plateelbakkerij Zuid-Holland.

Hildo and Mien Krop were committed communists. At the tenth anniversary of the Soviet Union, he made a medal and a few years later a bust of Lenin, which would always remain in his studio. In 1937 he made a bust of Stalin, which was unveiled in the Concertgebouw by the Dutch Communist Party. Krop never joined the party, because he did not want to endanger his position as a city sculptor.

Hildo Krop died in 1970. Since 2007, the Krop Institute has been located in villa Rams Woethe in Steenwijk.