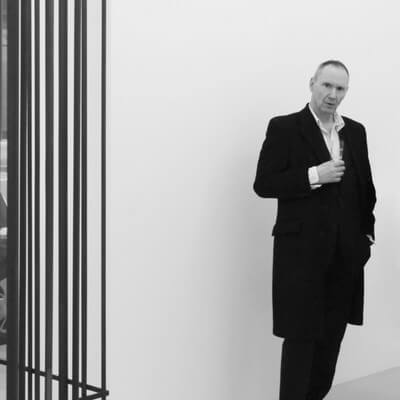 ‘As you can see, the houses stand directly on the floor, with the scale being an important part of the metaphor. These are not only nice looking sculptures, they question our environment and the way we function. I am most impressed by that.’

Hubert Kiecol is a sculptor and graphic artist; he was educated at the Werkkunstschule and the Hochschule für bildende Künste in Hamburg and has been professor at the Staatlichen Kunstakademie Düsseldorf since 1993.

In the early 1980s it became clear that Kiecol’s artistic views differed from the minimalist ideas of the generation before him. Sculptures used to be autonomous, like those of Carl Andre or Donald Judd, were not intended to interact with the viewer. Metaphors and associations were considered reprehensible. Kiecol, on the other hand, leaves the viewer free to interpret and discover his work.

His images and graphic work have a clear visual language, with basic shapes and materials from architecture. He makes objects from concrete, wood and steel. These are materials are said to be released from daily life by careful decisions about scale and processes of alienation. A tense relationship with the environment is a vocal point of his work.

Kiecol’s vocabulary moves between art and architecture. He uses everyday things such as stairs, windows and houses. The image Bundesbank, which he made especially for the 2015 edition of ART ZUID, shows his clear design language. He made nine boxes on top of each other with eighteen concrete slabs. It entered into a relationship with the environment, but at the same time was completely autonomous.

From 1981 he has taken part in solo and group exhibitions. Initially in Germany but since 1988 also abroad. Major art museums in Europe and the United States have Kiecol’s work, including the Museum of Contemporary Art (Antwerp), Museum für Gegenwart (Berlin), Fonds National d’art contemporain, De Défense (Paris) and Fondació Miro (Barcelona).