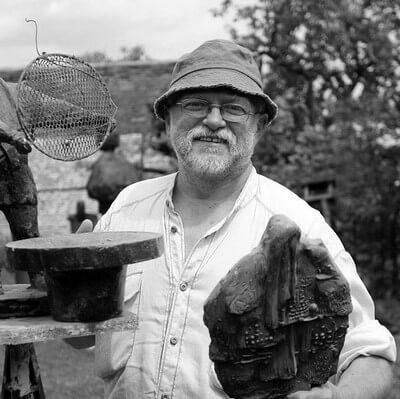 ‘Residents of many cities where my sculptures are installed identify strongly with them. They accept the sculptures and miss them when they disappear from their space after the exhibition time.’

In Gdańsk he witnessed the start of the Solidarity Movement led by Lech Walensa. This movement would lead to the political transformation of Poland. That experience made a lasting impression on Kedziora and would influence his work with critical, social and political influxes.

From the 1990s onwards, he has been working on a large series of sculptures of balance-seeking figures, such as the one shown during ART ZUID 2019. It is a group of floating and air-balancing images, including Acrobat With a Chair and Duo With a Chair. The statues are held in place with a rope or a rod.

With his works, Kedziora conveys a sense of instability to the audience. The sculptures represent human figures, which in itself is not very new. What is new is that his characters hang in the air, like tightrope walkers. In the middle of the street, in parks and shopping centers. Every public space can become its stage. The balance between his sculptures is precarious. The spectator waits for them to fall and crumble, but that never happens. There is always balance between falling and flying.

Jerzy Kedziora’s sculptures have been recognized with prizes and honorable mentions in Poland and abroad. His works can be seen in museums, galleries, private collections and public spaces.