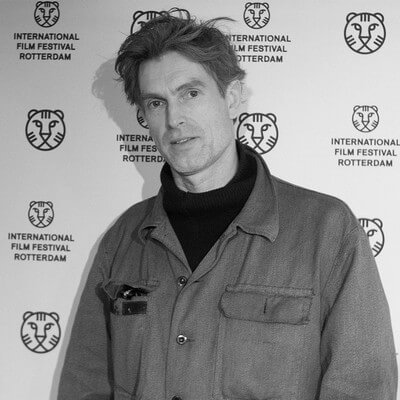 ‘Rules are made to lead things in the right direction. But those limits are not absolute, they are always changing.’

Joost Conijn is a visual artist and adventurer. He received his education at the Rietveld Academy (1992-1995) in Amsterdam, he subsequently completed two more years at the Sandberg Institute. He always explores the boundaries of art and technology, man and machine.

He gained recognition with his self-built machines. He records his reports of the journeys he makes with them on film. At the Rietveld Academy, he made a construction of a set of axles with bicycle wheels, the rear of which was driven by a motor. The human body acted as a chassis, steering wheel and pivot point between the two axles. In 1999 he built an aeroplane composed of bicycle parts, a wheelbarrow and a motor. He took off from the roof of the artists’ initiative “The Factory”. Two years later he toured Eastern Europe in a wooden car that ran on gas. The gas came from a wood gas generator. A second plane crashed and is now in the garden of Museum Boijmans van Beuningen (Rotterdam), a third flew from the Netherlands to Kenya in four months.

In 2000 he was awarded the Charlotte Köhler Prize for young artists; five years later the Cobra Art Prize. In the same year, he was nominated for the Prix de Rome. The Humanist Broadcaster commissioned him to make a film about the Netherlands. This resulted in Olland, a report of a cycling tour featuring two friends travelling throughout Morocco. They became acquainted with two Moroccan men who lived in the Netherlands. Although they only speak a few words of Dutch, they reflected on the situation in “Olland” at the time.

Joost Conijn’s works were a source of inspiration for Tommy Wieringa for modelling the character of Joe Speedboat in his novel of the same name (2005).