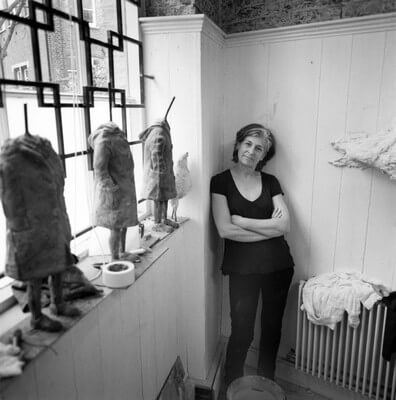 ‘I get inspired by observing aspects of everyday life and experiences – especially the stories we tell ourselves to explain this behaviour.’

Laura Ford is a sculptor, painter, performer, builds sets and installations. She grew up in a travelling circus family and attended the Bath Academy of Art. She then spent a short time at the Cooper Union School of Art in New York and then at the Chelsea School of Art in London, where she has lived and worked ever since. From 1983 to 1995, Ford was a teacher at Chelsea School of Art, senior lecturer at Middlesex University and taught at numerous London art schools.

After her participation on The Sculpture Show in 1983, with the likes of David Nash and Tony Cragg and many of her teachers, she is considered part of the New British Sculpture movement. Her images are faithful portrayals of fantasy, they often possess bittersweet and menacing qualities, mixed with tenderness. Laura Ford balances humour in combination with a keen observation – often to expose and discuss social and political issues.

Her work is intense, but also has a playful side and sometimes reminds her audience of their worst nightmares. ‘Five crying girls’, ‘hanging against trees’, ‘a homeless fox with a scarf over its head’, ‘who looks like a compassionate person’, ‘a vagrant’, ‘a woman in bags’. Her ‘Rag and Bone with Bin and Rag and Bone with Bags’ was shown at ARTZUID in 2013.

In 2005 she represented her native Wales at the Venice Biennale. She has had numerous solo and group exhibitions around the world. Ford’s work can be seen in many public and private collections in and outside the UK.