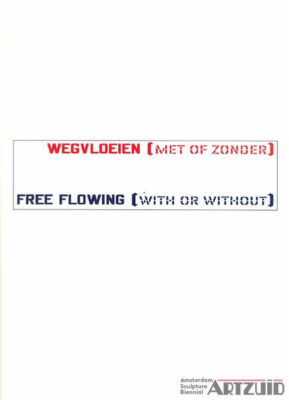 ‘I realized that I was working with materials, that people called sculptors, work with.’

Lawrence Weiner is a self-taught conceptual artist. Early on, he was impressed by Frank Stella and Jasper Johns. Verbal elements – texts and signs – play an important role in his work. He often presents cryptic texts on the walls of museums and galleries, but also on graphics, photographs and utensils. The words form verbal abstractions of the work of art which is conceived by Weiner. The work is only completed mind of the viewer when he reads the text and tries to understand it.

Since 1970 Weiner has lived alternately between New York and Amsterdam, where he makes books and graphics, often combined with geometric graphic shapes. For him, language is the most unobjective (“the most non-objective thing”) that we have developed. He sees texts as sculptures that come to life in the minds of spectators.

Lawrence Weiner wants to break through and change the conventional notion of “visual art”. Initially he worked with aerosol cans to allow fire or bleach to act on  fabric. At the end of the 1960s, this gave way to words or statements. Gradually the texts became more abstract, philosophical and poetic. He used adhesive letters to express his ideas.

Weiner has also made films in which texts were spoken and portrayed. He is one of the first representatives of conceptual art. Later he would also participate in performances where artists made their own bodies the subject of the action: body art. In the Netherlands, Lawrence Wiener had major exhibitions in the Van Abbemuseum (Eindhoven, 1976) and the Stedelijk Museum (Amsterdam, 1988/89). On the Spui in Amsterdam lies Wiener’s work A translation, from one language to another, an assignment he completed for the University of Amsterdam to make it more visible in the city.

For the first edition of ART ZUID in 2009, Weiner made Free Flowing (with or without), a projection on a facade. English words were written in black, and Dutch ones in red (Flooding, with or without).