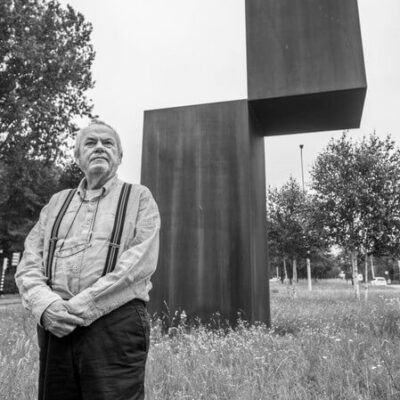 Lon Pennock was a sculptor. He studied sculpture at the Royal Academy of Art in The Hague and subsequently at the Ecole nationale supérieure des beaux-arts in Paris.

Immediately after completing his studies, he received two awards: the Buys van Hulten Prize and the Jacob Maris Encouragement Prize 1969. Twice he received a stipend from the Ministry of CRM (Culture, Recreation and Social Work) – in 1973 and in 1979 .

Lon Pennock was clasically trained, but his work soon turned abstract and even minimalist. Many of his works can be seen in his home and workplace in The Hague, such as Object aan de Morselaan, Balance of Sheets on the corner of Johan de Wittlaan with Stadhouderslaan, and Intersection, during the 1996 sculpture route.

Intersection consisted of two L-shaped beams. According to Pennock it is a crucifix with shifted axes and a twisted heart. It is large and resembles an industrial construction.In the River on the Blaak in Rotterdam was such an Intersection was created. Pennock had a special bond with this sculpture. For many years he was a  teacher and (deputy) director of the Rotterdam Academy of Visual Arts at the same Blaak.

In addition to his work as an autonomous artist, Pennock also advised on urban development and related fields. He carefully examined the way in which the sculpture relates to its environment. He would do that all his life.

In the summer of 2017, Lon Pennock’s sculptures Harvest and Man were shown during ART ZUID. Both objects, made of heavy blocks of Corten steel stacked on top of eachother, the sculptures seem to be snapshots but at the same time standing there eternally.