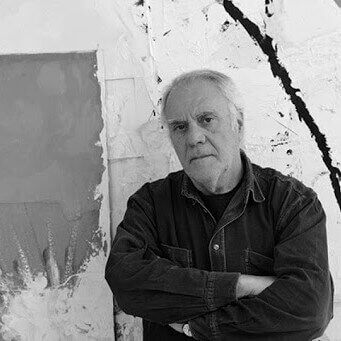 ‘My father was a traveler, my uncle a painter and I learned to look and see.’

Mimmo (Dominico) Paladino is a sculptor, painter and printmaker. He grew up in Naples and studied at the Liceo Artistico in Benevento from 1964 to 1968. In 1969 he had his first solo exhibition, he has since exhibited worldwide in numerous solo and group exhibitions.

In the early 1970s, Paladino focused on drawing. Much of the sketches he developed later appeared in his paintings. After moving to Milan in 1977, he primarily made monochrome paintings in red, yellow or blue, in which he incorporated geometric elements and found objects. His work was clearly influenced by the Arte Povera movement.

From 1980 onwards he experimented with printing techniques: aquatint, etching, wood and linocut. At the time, he was associated with the Transavantgarde movement, which consisted of Sandro Chia, Nicola de Maria, Enzo Cucchi and Francesco Clemente. In 1982 Paladino represented Italy in Documenta 7.

During his travels in Brazil he became fascinated by the melting pot of African and Catholic cultures. He started working with archetypes and symbols which led him to develop an allegorical figurative style, in which classical mythology, images from Christianity, modern art and ancient Egypt come together. Skeletal creatures, ghosts and totems assembled together formed complex compositions.

From that moment on, Mimmo Paladino combined painting with sculpture. Bright colors go hand in hand with a restrained and abstract style, which leads to expressive figures.

During ART ZUID 2015, Paladino’s untitled sculpture (Untitled) from 2000 was on display, an abstracted human figure made of marble, standing in the middle of columns.

In the summer of 2008, Porta di Lampedusa – Porta d’Europa was unveiled; a monument in memory of the migrants from Africa who died during their crossing to Europe. He collaborated with Brian Enovoor for the installation I Dormienti, which was made at The Roundhouse in London.