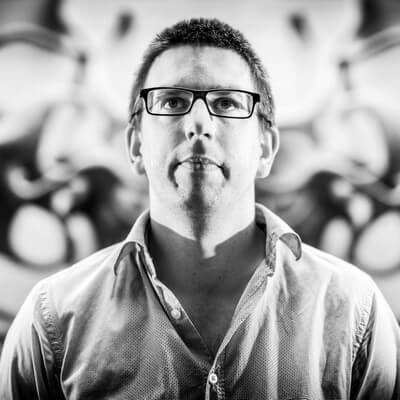 ‘What fascinates me is how sculpture has evolved throughout history thanks to new techniques and materials. I want to contribute to that.’

Nick Ervinck is a sculptor; his work combines traditional sculpture with new media; he works extensively with polyester and 3D printing techniques. He attended the Art Academy of Bruges and the Royal Academy of Fine Arts in Ghent. After graduating, he started his own studio, with his own team in Lichtervelde (B).

He creates a dialogue between craft and technology and between reality and virtuality. Important inspirations were Henri Moore, Barbara Hepworth and Hans Arp. Additionally, Zaha Hadid and futuristic blob architecture were also of great influence, leading to organic structures and twisted houses. The sculptures shown at ARTZUID 2019 resemble roots of ancient trees that have been designed in contemporary material.

For one of his works, he devised two terraces for the Zebrastraat in Ghent (2008), after which several monumental works for public space and private collections followed – in Bruges, Ostend, Tongeren and Emmen. His – often bright yellow – objects bear names such as EGNOABER, EITZO, LENNAP and CIRBUATS.

In addition to more conventional work, he explores the artistic possibilities of the digital revolution. He makes the boundlessness of the virtual space almost tangible with complex shapes in 3D prints, which would be impossible to make by hand. He allows them to interact with animation videos, “normal” and digital drawings, which creates entirely new sculptures.

Ervinck’s sculptures have a smooth skin and appear to have grown organically. They evoke associations with coral. But is that mineral, animal or vegetable? According to experts none of three or all three at the same time. This ambiguity allows for individual interpretation.

Nick Ervinck has been nominated for and received several awards. He has participated in group and solo exhibitions at home and abroad; inside and outside Europe.