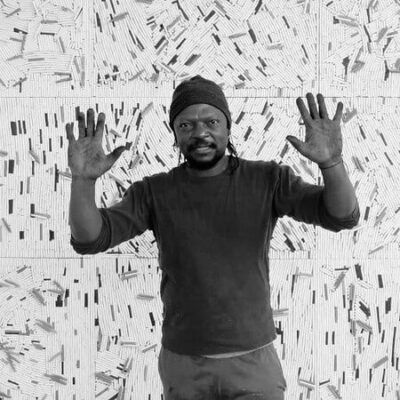 ‘I don’t believe in inspiration, there is something too mystical about it. The marketing lie commonly attached to artistry is that we’re these enlightened bastards, who wait for the wind of wisdom to bend on our heads.’

Pascale Marthine Tayou is a sculptor, installation artist and video producer. He studied law and later developed into an artist as an autodidact. After travelling throughout Stockholm and Paris, he settled in Ghent. He works alternately between Belgium and Cameroon.

Tayou often uses homemade and found objects in his work. Frequently these objects have an artisan African origin. He transforms these objects to comment on current social and political issues. The installation Plastic Bags (2001-2015) consists of fifteen thousand plastic bags, which were tied together by volunteers for weeks. The work is beautiful yet eye-opening; the multicolored pockets move gracefully in the wind. However, the viewer is also made aware of the harmful consequences of excessive plastic production. For Tayou, the bag is a symbol of globalization, consumerism and pollution.

In 2002 he took part in Documenta 11 (Kassel) and the São Paulo Biennale. His work was subsequently shown at the Venice Biennale (2005 and 2009). In 2010, Tayou’s work was shown in Cameroon at the Salon Urbain de Douala and Triennale d’art public. Museums in Rome, Herford and Ghent recorded his work too.

In 2009, one of Tayou’s sculptures was placed under a viaduct on Groesbeekdreef in Amsterdam South-East: namely Tayouken Piss, les pisseurs d’Amsterdam. The six naked, peeing men have the colors of the flags of Cameroon, the Netherlands and Belgium. The work refers to the famous sculpture of ‘Manneken Pis’ in Brussels.

Afrodiziak .. Afrozidiaquek .. Afrosisiaque was Tayou’s work that was shown at ART ZUID in 2013. The work features nearly a thousand colorful flags symbolizing the many nationalities living in the 54 countries in Africa; a huge collective of cultures, peoples and communities.