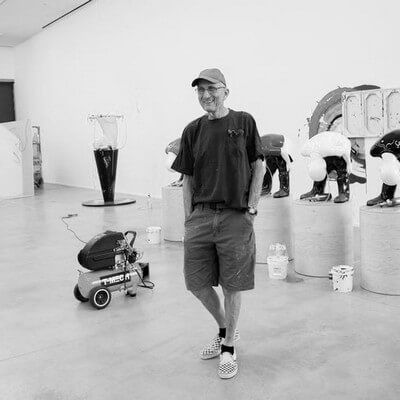 ‘I want to stimulate people’s imaginations, because then the event becomes something bigger. Much of my work is about scale, in relation to one person. I am interested in what a person can achieve on their own.’

Richard Jackson is a sculptor and painter; he lives and works in Los Angeles. He not only presents himself as an artist, but also grows Christmas trees, is a contractor and digs for gold. He studied art and engineering at Sacramento State College, lived in a house with Bruce Nauman for a time, and taught sculpture and new forms in his hometown in the early 1990s.

Since the 1970s, Jackson developed a form of painting in which he questioned principles and ideas. This done through a combination of conceptual procedures, humor and extreme disorder. Because he extends painting with material dimensions and leaves traditional forms for machines, vehicles and everyday objects, he has been called a neo-Dadaist.

His Big Ideas (1981) consisted of hundreds of painted canvases stacked in a sphere five meters in diameter. The exhibition The Maid’s Room / The Dining Room (2007) was a direct tribute to Marcel Duchamp’s last great work: Etant donnés.

During the 2011 edition of ART ZUID, Jackson’s iconic Dick’s Big Duck was on display. Almost an expression of camp incarnate, humor with an artistic intention and grotesquely executed.

In a solo exhibition in Pasadena, California, in 2012, he had a radio-controlled military model airplane with a four-and-a-half meter wingspan filled with paint crash into a wall that reads “Accidents in Abstract Painting.”

Richard Jackson draws on the visual lexicon of domestic environments, universal basic human activities and features of typical American life such as hunting and sports. Combining these images with physical, labor-intensive, and conceptually rigorous artistic practice, Jackson has built a vast repertoire of work that questions and challenges the art world as a whole.