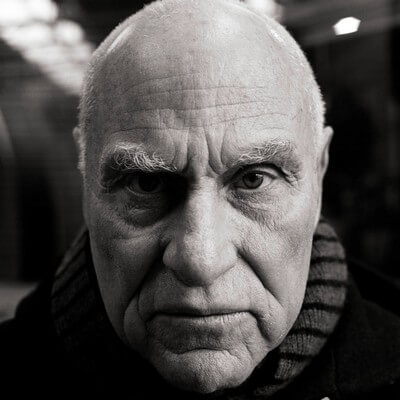 ‘I will try to immerse myself in as many of the formal features of a landscape as possible.’

Richard Serra is a sculptor and video artist, who initially studied English literature. To make a living, he worked as a student in a local steel factory. These experiences would leave a lasting mark on his career.

In 1961 Serra went to study art at Yale University (New Haven). Firstly his interest was in painting. After befriending the composer Philip Glass in Paris, he realized that his future lay in sculpture. He returned to the United States, settled in New York and in the period 1966-1967 made works with rubber and neon tubes, not very common at the time.

His circle of friends included artists such as Steve Reich, Carl Andre, Sol LeWitt, Walter De Maria and Eva Hesse. Robert Smithson was a major influence on his environmental art and land art.

Serra is counted among the minimalists and creators of land art. He became known for his monumental works of weathering steel. He became one of the most influential contemporary American sculptors and minimalists. Serra’s largest work in Corten steel is The Matter of Time, which is on display at the Guggenheim Museum in Bilbao. It includes eight installations with fifty parts, including ellipses, circles and spirals.

Serra’s works are included in many collections and museums. In the Netherlands, his works can be seen in Maastricht (Bonnefantenmuseum), Otterlo (Kröller-Müller Museum), Rotterdam (Boijmans Van Beuningen), Amsterdam (Stedelijk Museum), Tilburg (De Pont) and Wassenaar (Voorlinden).

Richard Serra could be seen at ARTZUID Sight Point in 2013. The sculpture previously placed in the garden of the Stedelijk Museum (Amsterdam) in 1975, on the Museumplein. Three plates of Corten steel almost twelve meters high are placed against each other and seem to balance each other. It is an observation point but at the same time a focal point for the environment.