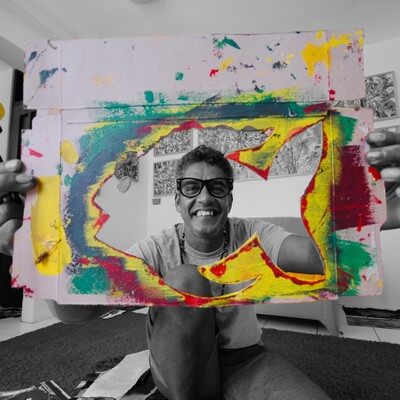 ‘I am more than an artist, I am an instrument of feelings, a messenger. I don’t believe if I make something, it will stop there. I see myself as a wartime messenger: you give me a letter and say: take your gun, jump on your horse, ride right through the lines and take that letter to the emperor!’

About Roberto Tjon A Meeuw

Roberto Tjon A Meeuw is a painter and sculptor; self-taught. Before painting doors and shutters he was a soldier and plumber. He makes work from waste materials; for him this is a means of conveying that we must take better care of nature. He became known for his fatu bangi; enlarged benches of residual materials that he finds along the side of the road.

The benches are meant for relaxing, catching up and watching passers-by. Due to their grotesque enlargement, they can also be regarded as sculptures. The fatu bangi first appeared in Rotterdam, at the invitation of the Center for Visual Arts there, before moving to Amsterdam in 2010. In 2011 they were shown at ART ZUID. After the summer they moved permanently to Amsterdam-Zuidoost.

The fatu bangi are derived from wood carvings of the Maroons and the wickerwork of Surinamese chairs. In the Saamaka museum in Suriname, near the village of Pikin Slee at the upper reaches of the Suriname River, is one of Tjon A Meeuw’s guard sculptures. The Saramakaners live separately: men and women in their own huts. The museum pays attention to the separate worlds of women, men and children.

Tjon A Meeuw represents a collaboration between the Netherlands and Suriname. Both countries can learn from each other: Suriname cannot cope well with the rainforest and, according to him, the Netherlands cannot deal with advanced technology. His role is that of a messenger between the two.