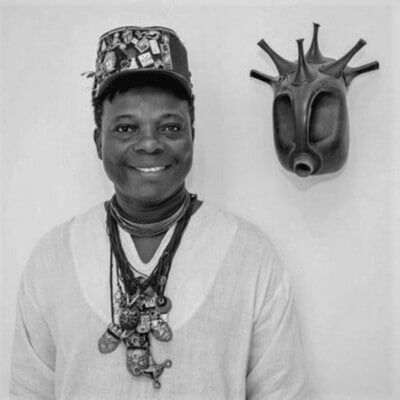 ‘I send back to the West what belongs to them, that is, the refusal of the consumer society that invades us every day.’

Romuald Hazoumè is a visual artist who became famous for his masks, made from discarded jerry cans. He started this in the mid-1980s. His works are often as politically charged as they are humorous. His work is loaded with cultural characteristics, while at the same time they relate to global issues such as oil extraction, modern slavery and consumer society.

For example, his installation NGO SBOP (2011) revolved around the fictional NGO Solidarité Béninoise pour Occidentaux en Péril. This organization was set up especially for Westerners in need. In the installation of the same name, familiar political and social patterns were undermined. This opened up surprising and new perspectives on the relationships between Africans and Westerners.

His La Bouche du Roi, adapted from a 1789 depiction of a slave ship, was widely exhibited in the United Kingdom as part of Parliament’s centennial commemoration of the Slave Trade Act 1807. Here too Hazoumè only used recycled materials.

He took part in the Lyon and Gwangju Biennales, both in 2000, and in the 3rd Biennale of Contemporary Art in Moscow (2009). From 2010 Hazoumè had solo and group exhibitions in London, Brussels, Paris, Helsinki, Manchester, Moscow, Marrakech and Brisbane, among others.

Elf, rien à Foutre, a Peugeot full of petrol cans, which has half disappeared behind a wall, was on display during the third edition of ART ZUID (2013). For decades, the French petrol brand Elf was busy pumping out and cashing in on the oil reserves of the former colony of Benin. The work directly refers to the illegal trade in oil products.

Romuald Hazoumè lives and works in his hometown Porto Novo, in Benin.