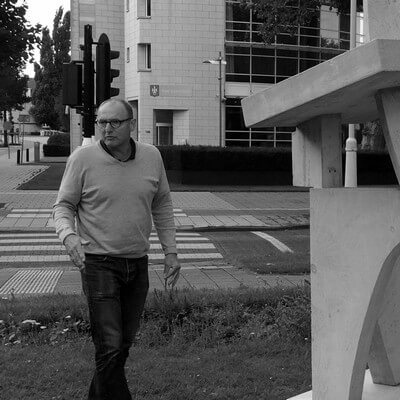 ‘I want to make sculptures, not design. A good idea can be a starting point, but the creative process often leads me to new ideas and forms. In this way I always create a sculpture that I could not have imagined in advance.’

Ruud Kuijer is a sculptor; trained at the Royal Academy of Art and Design in ‘s-Hertogenbosch and the Jan van Eyck Academy in Maastricht. Kuijer makes abstract sculptures, in which he often incorporates recognizable shapes. At the beginning of his career he experimented with iron, rope, wood and carpet, from 2002 he mainly worked with concrete. In recent years he has been using more iron again.

Kuijer also taught at art academies, in ‘s-Hertogenbosch and Berlin. He became known for the Waterworks series, on which he worked from 2001 to 2013. They are seven large-scale sculptures along the Amsterdam-Rhine Canal, on an industrial estate in Utrecht. They are monolithic statues, in one piece, made of reinforcing steel and concrete. About ten years later, a gentle slope would connect the images.

Since 1986 Ruud Kuijer has exhibited in galleries and museums in the Netherlands and abroad. His sculptures are included in the collections of private collectors in Europe, Australia and the United States. In the Netherlands, Kuijer’s work can be seen in the Bonnefantenmuseum (Maastricht), Stedelijk Museum (Amsterdam), Centraal Museum (Utrecht) and Kunstmuseum (The Hague).

ART ZUID 2017 showed three sculptures by Kuijer. Untitled appears to be a composite number of concrete slabs, but turns out to be made of cast concrete in one piece. Commissioned by ART ZUID, he made the block sculpture Hanging Flat (standing / lying / hanging / leaning), which was also shown that year. Concrete and steel allow him to be free from pictorial influences. Kuijer is concerned with the principles of sculpture; about how to make a construction. The parts can then adopt different postures: standing, lying down, hanging, leaning or sticking through something. According to him there are ingredients for a sculpture, but no recipe.