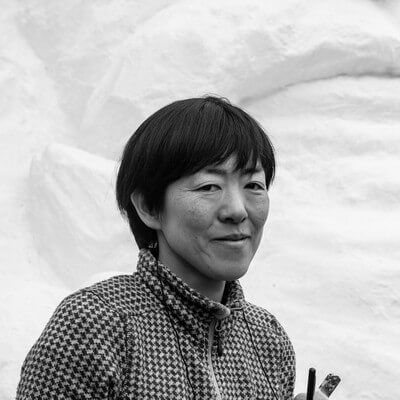 ‘You, me, this place, everything that is here – we and all objects are transformations from the same basic material. So at a certain level there is material equivalence.’

Sachi Miyachi is a performance and installation artist, whose works are location-specific. In Tokyo she trained at the art faculty of Wako University. There she immersed herself in the rituals of daily life in Japan. From 2004 to 2009 she attended the Gerrit Rietveld Academy and the Sandberg Institute in Amsterdam, in the field of audiovisual arts. Shee continued to live and work in Amsterdam.

In her work, “cleaning” is an influencial theme. For example, she made a meter-high cleaning trolley for Kunstvlaai. And for Mercy she made a meter-long joke. A starting point in her work is also overcoming setbacks and adapting to an ever-changing environment.

She constructs immense wooden structures by hand, in an almost ritualistic and obsessive way. Each installation embodies her vision of the social and architectural environment. Her Ballad of Caution (2009) was in the lobby of the WTC building in Amsterdam. The enlarged models of cleaning materials directly commented on the sterile and disciplining architecture it was situated in.

A year later, she built a sloping golf course in a dark parking garage on the Zuidas (Amsterdam). It was an exercise of optimism in the depressing environment. She built a house in 2013 on the roundabout of Hoofddorpplein (also Amsterdam). The hut – a quiet wedge provided shelter for those who wanted to stay amid the heavy traffic.

The Corner Piece was shown during ART ZUID in 2019. She built the four-meter high and wide plastic sculpture on site. She was inspired by Michelangelo’s head, which has adorned a corner façade in the neighborhood for decades. Visitors could literally enter his head and experience the environment through his eyes.