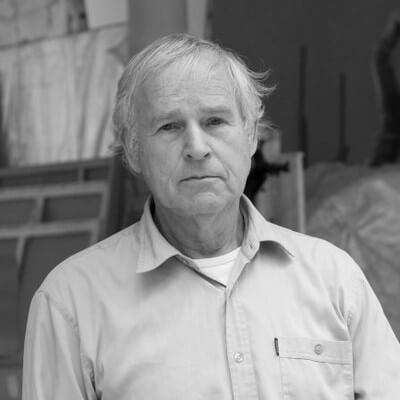 ‘The viewer just has to find and think what he wants.’

Sjoerd Buisman is a sculptor, draftsman and conceptual artist. He lives and works in Amsterdam and Normandy. His work is non-figurative and mostly in the form of land art which is conceptual in nature. In Rotterdam, he attended the Academy for Visual Arts and then the Ateliers 63 in Haarlem. For a long time, he taught visual arts at academies in Rotterdam, Den Bosch and Arnhem.

Initially, nature was an important source of inspiration; he incorporated fruits, seeds, trees, plants and leaves into his work. He studied botanical deformities and growth processes of trees and plants and during his travels he recorded these processes in photos, drawings and texts. In the early 1970s, this led to a series of multimedia works: ‘plastic events in nature’. The conclusion was that nature is manipulable but always follows its own laws.

Buisman forces his living materials in a direction, just like forces of nature do. With a steady hand, it seems to embrace the vegetable matter; a hold that will not let go until the parts have followed his will and made his intention clear.

In the early eighties, he made Phyllotaxis sculptures. This botanical term refers to the grouping of leaves around a branch or trunk. The spiral leaf position – like a palm or celery – would become quintessential in his work. He makes the sculptures from wood, iron, bronze and concrete, in all kinds of formats, both horizontal and vertical. The later and more playful theme of the Ouroboros, the snake that bites its own tail referring to a new beginning and immortality, can be traced back to the principle of the spiral.

In several places, there are bronze casts of old tree trunks, as quotes from the old land. The internal archive of the trees has disappeared. Buisman was awarded the A. Roland Holst medal in 2003 for his oeuvre.