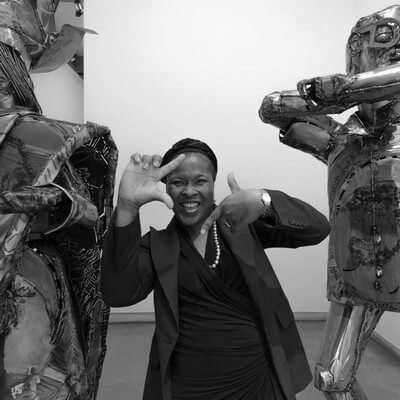 ‘I’ve always had a foot in both camps and I’ve had to shout out loud that my culture is just as important as yours.’

Sokari Douglas Camp is a sculptor. Her work consists of steel, supplemented with oil drums, aluminium, gold leaf, copper and acrylic paint. Nigerian cultures and in particular the Kalabari heritage of her native land and life in the United Kingdom are important sources of inspiration.

She was raised in England by her brother-in-law, the anthropologist Robin Horton. After high school, she studied at the California College of Arts in Oakland, she continued her studies at the Central School of Art and Design and the Royal College of Art in London, where she still lives and works.

She borrows the poses of human figures from famous paintings in Western art history. An eighteenth-century print by William Blake was a model for three female figures that symbolize as many continents. Old Europe stands in the middle, tired and dependent on her companions who keep her afloat.

Douglas Camp received many commissions for public memorial sculptures. Famous were the Battle Bus: The Living Memorial to Ken Saro-Wiwa (2006) and All the World is Now Richer (2012), a sculpture memorial commemorating slavery. For Green Leaf Barrel (2014) she was inspired by the heavily polluted Niger Delta. The female figure depicts a goddess, who ensures growth, which comes from an oil barrel split in two. Douglas Camp focuses on the positive because the negative often wrongly determines the public discussion.

Camp has received a working grant from the prestigious Henry Moore Foundation. Her works are in the collections of major museums in Europe and Japan and in private collections around the world. Her Blue Head / Pink Head at ARTZUID (2013) is representative of her oeuvre.