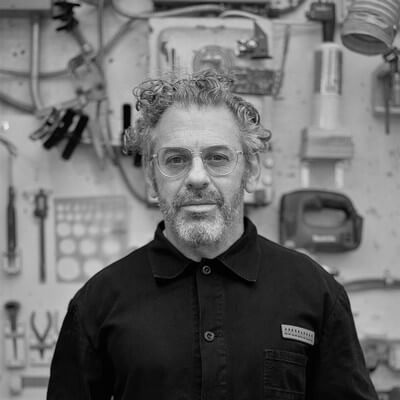 ‘NASA is the ultimate status symbol of technology, it’s the highest-acclaimed.’

Tom Sachs is a sculptor and artist. Trained in London as an architect, he returned to the United States, where he set up a New York studio in the disappearing downtown machine district: called Allied Cultural Prosthetics.

In 1994, he was invited to create a scene for his employer’s Christmas display: Barney’s lighting displays. In this work, titled Hello Kitty Nativity, Sachs had replaced the Virgin Mary with a Hello Kitty figure wearing an open Chanel bra. The three kings had been replaced by Bert Simpsons and the McDonald logo hung above the stable. From that moment on his name was made and the disposable consumer culture, branding, and cultural fetishization of products would become guiding in his path.

Tom Sachs criticizes the speed and regularity with which our materialistic society replaces and uses commodities. Commercial icons and recycled consumer goods return regularly. Such as the glossy black Prada toilet from 1997, a working toilet made from luxury packaging of Prada articles, with the company logo prominently displayed.

A recurring theme in Sachs’s work is space and space travel. He is particularly fascinated by the Apollo program from the 1960s and 1970s. But also, NASA’s continued role as an incubator for ground-breaking technologies that later emerge in everyday life and consumer products. For example, Tom Sachs created a whole range of space-related works, including models of spacecraft and shoes intended for astronauts.

Sachs became famous for his reproductions of masterpieces of engineering and design. Humour and irony play an important role in this. ‘Miffy Fountain’, a greatly enlarged, three-dimensional Miffy figure, was on display during the third edition of ART ZUID in 2013. Again, it represents a protest against the commercialization of children’s toys and the false sentimentality that often surrounds it.