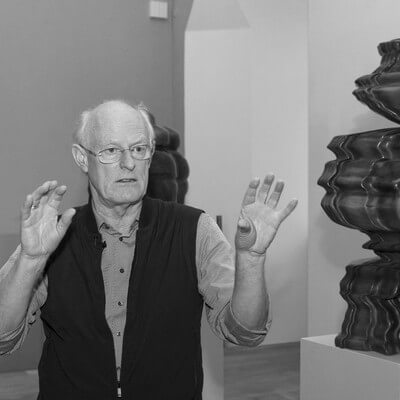 Tony Cragg is a sculptor – he lives and works in Wuppertal, Germany. He studied at the Art Academy in Gloucestershire, at the Wimbledon School of Art and at the Royal College of Art in London. Throughout his studies, his initial interest in painting shifted to sculpture.

Getting acquainted with the works of Richard Long and Bill Woodrow significantly influenced his development. He collected materials that he used in nature – or from household waste – for his work. In 1976 he got a job as a teacher at the Art Academy of Metz; a year later he moved to Wuppertal. Since 1979 he has taught at the Kunstacademie Düsseldorf, where he has been the director since 2009.

The eighties were a breakthrough for him; his work was shown at many important international exhibitions, such as Documenta 7 and 8 (Kassel) and the Venice, Sao Paulo and Sydney Biennales. In the mid-1980s, works with loose plastic parts gave way to large bronze plastics. And he started making more drawings.

In 2000-2001, the Antwerp-based MuKHa presented Cragg’s most recent work, which was thematically grouped according to material use. Bronze with bronze, wood, glass, ceramics and polymers together. The starting point is that Cragg’s sense of material is fundamental to his approach to sculpture. That is why materiality is an important element in the experience for the viewer. From 2001 to 2006 Tony Cragg was a professor of sculpture at the Art Academy in Berlin.

In 2006 Cragg bought a fifteen-hectare park in Wuppertal with the monumental villa Waldfrieden. Two years later, his own Skulpturenpark Waldfrieden opened there, where not only his own work but also that of fellow sculptors is exhibited.