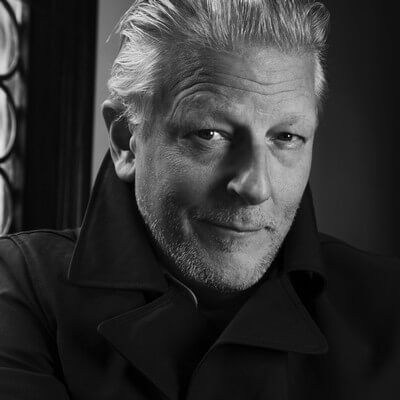 I try to make people look and think differently, that is my job as an artist, I feel that I influence people: I tickle their minds.’

Jan Fabre is a multidisciplinary artist. He received his training at the Municipal Institute for Decorative Arts and Crafts in Antwerp and at the Royal Academy of Fine Arts there. He became known for his theatre work (theatre company Troubleyn) and his visual artworks.

After a few years of writing plays, he started directing in 1980. The ‘Power of Theatrical Fools ‘was shown at the 1984 Venice Biennale. The ecstatic body occupies a central theme in his theatrical work. Fabre gradually integrated his works with those of Marina Abramovic, Wim Delvoye, Henk Visch, Luc Tuymans and others.

As a draftsman, Jan Fabre became known for his Bic-art, drawings made with a ballpoint pen, often of immense proportions. In his work, the boundary between drawing and sculpture is blurred. At the end of the 20th century, he introduced his bronze sculptures, such as ‘The man who measures the clouds’, on the roof of the S.M.A.K. in Ghent (1998). It is a tribute to Fabre’s twin brother who died when they were young. The title of ‘Searching for Utopia’, a turtle enlarged many times with a rider on its shell, refers to Thomas Moore’s Utopia, but also relates to ‘The Boy Who Talks With Animals’ by Roald Dahl (1977). This was shown at ARTZUID 2011. During ARTZUID 2019, his works 7 Bathtubs and The Man Who Gives Fire were on display.

Fabre received many prestigious distinctions, including from Queen Paola and the Catholic University of Leuven. In 2008 he realized thirty large installations that confronted the works of Flemish, Dutch and German masters. Videos of a performance recorded there were shown in Muhka in Antwerp two years later.

Jan Fabre’s work has been awarded several times and can be seen in Museum Kröller-Müller and De Fundatie, among other museums around the world.