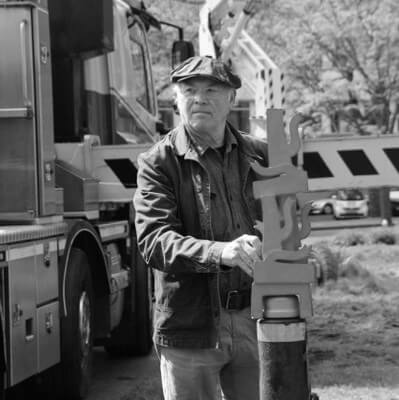 Klaas Gubbels is a visual artist, draftsman, graphic artist and sculptor. He is best known for his still lifes of tables, chairs and coffee pots. He studied advertising painting at the Technical School in his hometown of Rotterdam. He found work in the advertising studio of The Bijenkorf, a large department store. He then followed an evening course at the Academy of Visual Arts in Rotterdam. Subsequently, from 1952 to 1958 he studied at the Academy of Art Practice in Arnhem, but did not take the final exam because he was afraid of failing art history.

In 1955 Gubbels had his first exhibition, together with Just Sark, and ten years later the first foreign one, in Paris and Lisbon.

In the 1970s he was a teacher at the Willem de Kooning Academy in Rotterdam. In the winter of 2004-05 he had a major retrospective exhibition at the Museum of Modern Art in Arnhem. Ten years later, his 80th birthday was celebrated with a themed exhibition at Paleis Soestdijk.

The number of subjects that Gubbels takes as a starting point is limited: table, coffee pot, chair, cup, bottle or funnel. The colors vary from bright blue and flaming red to sober shades of gray and the techniques and materials vary greatly. His works have gradually become more and more abstract. At first it seems daunting, because of the limited themes. But ultimately that contains strength and charm. The photographs, lithographs, woodcuts, collages, murals and objects trouvés have links with Morandi and Modigliani and seem influenced by Marcel Duchamp, Man Ray and George Segal.

Née de Terre, the corten steel coffee pots that were on display at ARTZUID in 2011, are representative of Gubbels’ oeuvre. Klaas Gubbels lives and works alternately in France (Ardèche) and the Netherlands (Arnhem). Major Dutch museums and corporate collections have his works.