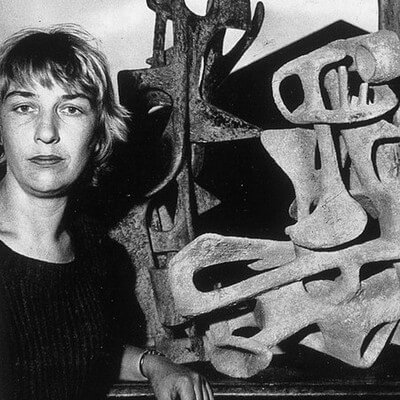 ‘I did not mind. I wasn’t very upset about it because I thought my time was coming. Corneille always saw me as his neighbour. Cobra only became important afterwards. So around 1965 it became super important, that word Cobra.’

Lotti van der Gaag was a sculptor and painter. The insistence of her former partner, the painter Bram Bogart, led her to start sculpting in the 1940s. She also took up classes at the Royal Academy of Art and the Free Academy in The Hague.

In 1950 she left for Paris and through Simon Vinkenoog came into contact with members of the Cobra movement, including Karel Appel and Corneille, with whom she shared a studio. The latter, however, objected to her joining the movement. Van der Gaag therefore never took part in a joint exhibition but was strongly influenced by them, especially when it came to her fantasy figures. In 1951 she took classes in the studio of Ossip Zadkine. A year later her work was shown in the Stedelijk Museum in Amsterdam.

Her image Sun Rocket (1957) was shown in 2011 on ARTZUID. It is a work from a series of more than a hundred imaginary beings. In 1958 she received the Jacob Maris Prize. From 1974 Lotti van der Gaag started painting; fantasy figures continued to play a predominant role in these works.

In 1994 she was mentioned in a catalogue of the Stedelijk Museum as a member of the “Experimental Group in Holland”; something that was firmly denied by Corneille and others. Lotti van der Gaag died in 1999.